Those Ain't No Texas Longhorns 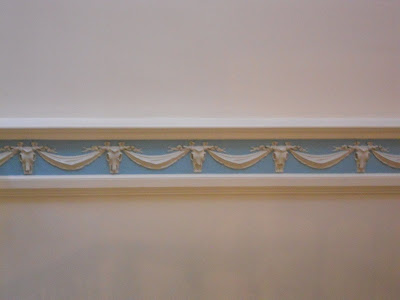 Not to be outdone by my fellow Americans, I finally made it up to The American Museum in Britain. It was a lovely day out with my dear friends Josh and Sarah. We ate oatmeal cookies, snickerdoodles, and some ginger cookies that were decidedly unamerican. And we sat on the grounds of Claverton Manor and talked about babies, bulk-buying flour, and life.

It's taken me five years to make it up the hill to the museum, in large part, because touring a museum of my own country's history felt a bit squidgy, or rather, felt a bit too much like being a tourist to me. One of the many things I am guilty of is being too much of a snob to embrace the city I live in. Oh and I'm really bad at museums. I don't see what's in front of me. I see the words but only skim them, and I almost always forget to look at the objects they refer to. I'm supposed to be learning patience along with gratitude. I am not patient, even with myself.

I'm told by my fellow Americans that the museum doesn't quite tell the story of American history. I'm inclined to think that we all learned our history from the same text, and I know that we all saw it through the same filter of American childhoods. Given all this, I was surprised to find myself rereading-twice, three times, four times-a small blurb about the early years of the American revolution. It took a fifth read before I finally got it. The Boston tea party is referred to as infamous. Five tries to catch the phrasing that put me off. Of course the Boston Tea Party is infamous. The museum makes little of America's split from Britain and even less of the War of 1812. And really, if a group of Americans or Britons went to their local ports and destroyed the cargo on ships what would we call that? Infamous is a perfect descriptor, even if it makes my eighth-grade spine twinge. 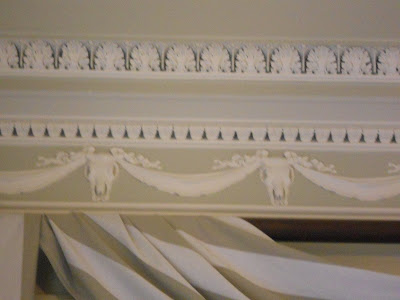 The museum was meant to help in "fostering historic ties between the United States and the United Kingdom." And I assumed that the decoration of the house must have had that same goal in mind. So when Sarah kindly pointed out the cornice in the entrance. I assumed that it was meant to represent Texas Long Horns. Admittedly this seemed a bit of an odd choice given the other possibilities of eagles, turkeys, or even moose.

The lovely staff, and they really are lovely, were kind enough to set me to rights. They are laureled ox skulls and are original to the house.
Posted by American in Bath