When I was small, my mother had a glass jar with a red plastic lid. Every year when the sun began to get hot, I'd pull up one of the bright yellow kitchen chairs to the sink and help her fill the jar with water. My mother let me unwrap the Lipton tea bags, ten in all, and dip them into the water. My little hands were careful not to let the strings loose as I pulled them over the lip of the jar. My mother would screw on the jar's lid. I loved the feel of the strings pulling through my fingers as the lid went round and round. I always wanted to carry the jar out the back door. I wanted to place it on the concrete stoop where it would warm in the sun. This was Mom's bit. She always got to move the jar from sink to steps. I think she liked that jar, painted in sunflowers as it was, and she was certain I would turn it into a million little pieces. A gallon of water weighs just about eight pounds. My mother was wiser than I gave her credit for.

It's reasonably rare, four and a half years into my life in England, that I really miss something from home. But this summer, I have craved sun tea. We have no garden access (yard in American). And our front door gets little day light, so I've had to make some changes to the process. 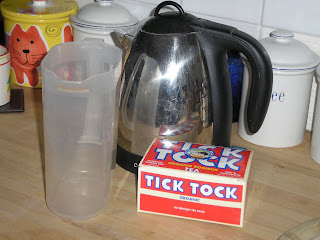 Black tea here is essentially the same thing as black tea in the States. It brews a lot quicker, and it has a stronger taste. I've found that Rooibos (red bush) tastes much more like I remember sun tea tasting. It's a 20 year-old memory, so I'm likely wrong. 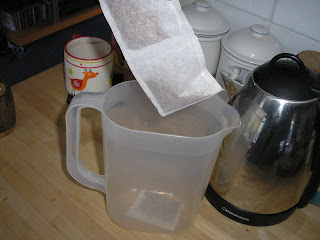 I'm using three tea bags to a liter of water, but I like the taste of strong, cold tea. 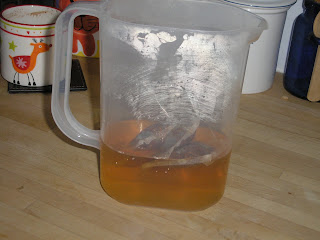 I add a quarter of a liter of boiling water, and I leave it to steep for thirty minutes, until I happen to remember it, or until I go to make a cup of coffee and notice it. 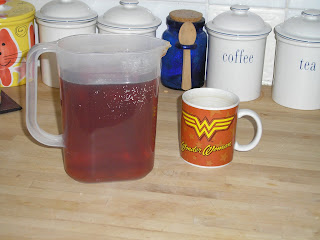 And then I add cold water. I always drink the stuff out of my Wonder Woman mug, because I've generally hoarded all of the water glasses next to my bed.


The housemate has taken pity on me, and she's made space in the fridge to allow for ice cold drinking.
Posted by American in Bath