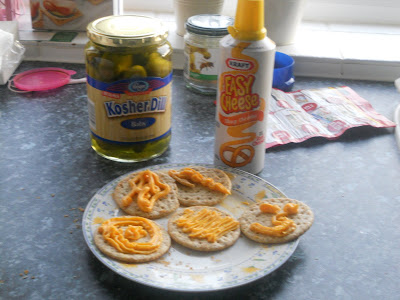 In the US cheddar is orange. It's uber-pasteurized, and in it's extra-strong (sharp in American terminology) form, it tastes rather less strong than mild English cheddar.  Much of this type of 'cheddar' is a heavy processed cheese, and it is not cheddar as it is defined in Europe. This should be pretty obvious given it's plasticine texture and bland taste.

I grew up on those over-processed and plasticy cheeses. For a short period my mother worked as a child-minder (in-home daycare), and she served government cheese to the family and children in her care. That cheese tasted like cardboard, but I now have a strong affinity for it as well. 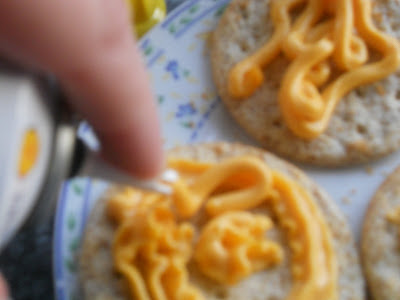 When I was growing up, the big treat of the cheese world for me was squirty cheese. Usually, it appeared in the crevasses of celery stalks at family holiday gatherings. I made it back to the UK with thee cans. I fully expected to think it was the most disgusting thing on planet. Instead, I've eaten it all.
Posted by American in Bath