Religion in England and America Part 1: Ma'am, I am tonight. 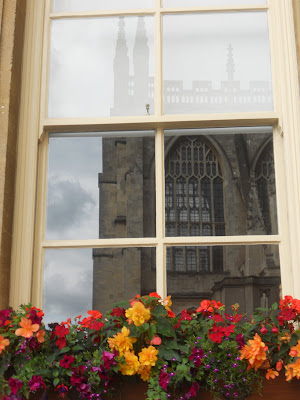 Here is a secret: Very occasionally you can find me sat in the back of Bath Abbey, hymns marked with bits of paper, prayer book in hand. Very occasionally is probably an exaggeration. It has happened once in the last two years. Though four times in the past few years, I have bypassed the queues of tourists, sat down, and slipped slowly off the pew onto the dull green kneelers. It is one way to survive the funerals that are too far away to attend. The last time I sat in the Abbey it was to ask my grandmother if she understood, now that she was gone, why it is that I don't go to church. I assume omniscience of the dead. Gram knows now whether or not she needed to worry for all those years about the state of my soul. I do not believe in God. I do not believe in heaven  or hell. I do not believe in an afterlife, except for when it keeps grief at bay.

It's the difficulty of defining terms in the middle of a conversation. Or rather, it is the difficulty of defining terms while taking into account the underlying cultural assumptions about those terms. I am undoubtedly a US citizen, an American by cultural upbringing and by birth. I have friends whose children who undoubtedly US citizens, but they are English by cultural upbringing, and many of them are undoubtedly British citizens as well. I'll leave the immigrant question for another day.

I'd like to tell you that it was in the early part of this decade that, in America, the term Christianity became synonymous with a specific type of Christianity--one that is full of condemnation, vilification of the other, and a propensity for being a single issue and single party voter. The future flatmate was asking me if I was that kind of American. A question I never hear here, perhaps because I move in the wrong circles, is "What kind of Christian are you?" We don't ask that question in America either. Instead we ask, "Are you looking for a church?" or "Would you like to come to Church?" or "Are you a Christian?"

This Easter three things happened in quick succession that made me awfully squidgy. A fellow blogger mentioned, somewhat uncomfortably, that her love of Easter was based in her Christian faith. I was accosted by a local missionary who was having a decidedly bad day. And, when asked what my father did for a living, I answered on the condition that I not be judged.

But to unravel those things, I think we all have to be on the same footing. I'll try to get us there in the next post.