Religion in England and America Part 2: At the Calling of Your Hearts 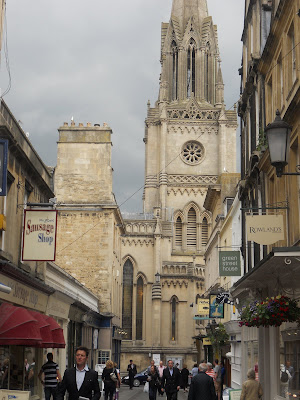 Among my dinner party tricks here in England is the ability to produce dry humor with an American accent. If I'm having a particularly good night, I follow it up with a bit of irony.  My world is getting awfully small, feel free to invite me along as your spare female.

For lunch gatherings, I produce shocking information about the States and its Americans. Much like London isn't England, New York isn't America. American's do not, on the whole, sing the National Anthem at the beginning of the school day. (They do say the Pledge of Allegiance unless their families object on religious or other grounds).  There are Pro-Choice Christians in America. Most American's don't really care whether or not their brethren are practicing the right kind of Christianity or any Christianity at all. And many many many Americans don't practice and do not know much about Christianity.

The thing about New York and London is just obnoxious no matter where you come from. The rest are things that many of the English find rather perplexing.

It's hard to imagine preforming the same party trick in the States. Maybe I've just kept the wrong the company in the States. More probably, I don't know the English as well as I know the Americans. Much like it is impossible to identify the characteristics of your own culture, it is very difficult to even intrinsically know the characteristics of another culture. As frustrated as I am by the assumptions the English bring to the cultural dinner table, I bring cultural assumptions of my own. Maybe you're an Australian reading this in Beijing. Maybe you're an Indian reading this in Georgia. Maybe you're an American reading this in England. Probably you'll disagree with my evaluation.

Right now I'm eating couscous with sultanas. And I, if you were an Englishwoman sitting next to me, can tell for certain that you'd have trouble wrapping your head around how it is that I react so strongly to the British Government's financial support of religious schools. Why it is that I am taken aback by the portrayal of Rector's wives on television and in the media. That I cannot fathom how it is that anyone in England could claim that it is not a Christian country.  And mostly my sheer disbelief that when faced with the question of someone else's choices of spirituality and belief being office gossip--except of course when my own prejudices rise to the top.

It all sounds rather negative doesn't it? It isn't really. Here's the thing, there are many meanings of the question, 'are you a Christain.' I'll keep it to the English and the Americans. It becomes too difficult if I also include the rest of Britain or Canada.
I wonder if we can say we understand each other now? Can we safely say that every experience of organized religion and opinions of it that I have had in England have been heavily influenced by my experiences of the same in the US. Can we agree that, on Monday, I'll be talking about me and my experience of religion in the UK and not about all Americans? Can we agree that neither of these cultures have either practiced or exported the beliefs they hold dear particularly well? Oh good, phew.


Posted by American in Bath