Preachin' to the Choir 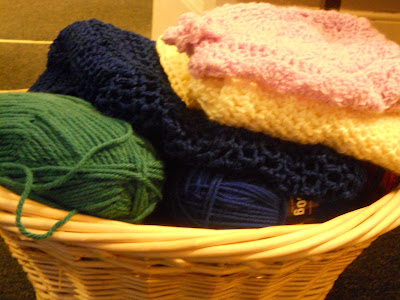 This year the gifts will be handmade out of necessity rather than by choice. That is to say, the gifts from me are often hand made. This year though they must be. There will be no hurried last minute Christmas shopping or splurges for the little ones. Six-year-old girls want knitted muffs for Christmas, right? Right? And little boys are desperate for dinosaur hats in acrylic? And who doesn't want a pumpkin pie rather than some nice hand cream? Clearly that last one doesn't include the English.

And I am blessed, and I am grateful, and I am certain that I am enjoying more than my share of grace in this lifetime.

At this time last year, I was working for a large company. My schedule frequently changed three or four times in a week. I was told to work later than the last bus home, and the company wouldn't pay for the two-mile taxi ride--the one that cost more than an hour's wages. I was asked to slide the company's advertising through my neighbors' doors during one of the coldest Decembers on record. All because the company in question was 'struggling.' Never mind the numerous new stores they were opening or the shareholder payouts or upper management that was making more than 20 times that of underlings like me. And I kept the job because I wasn't making enough as an hourly-paid  lecturer to make ends meet.  And then I felt lucky, because the company didn't hire full-time. I was working with folks who were subsisisiting on beans on toast. I told a friend at the time that I had no idea how I could possibly live any closer to the edge.

I didn't leave the job until I had another lined up. The new company went into administration two days before I was supposed to start. Two months later I lost my teaching position in a mass layoff with two weeks notice.

It turns out that it is really easy to live closer to that edge. It wouldn't be if I had children or dependent parents. It wouldn't be, if I weren't so close to so many people who are using boots and nectar points to feed their families and themselves. It wouldn't be, if I didn't love my job, exactly the job I got a PhD to avoid. I am blessed. I am grateful. And I am experiencing more grace than I should. And by accident of life, I am learning to be a short-order cook.

It's lovely to be surrounded by wool again, to be digging in boxes for forgotten notions, to be searching patterns for just the right sort of muff, and to be fantasizing about the wool I'll buy in end of season sale. And wondering if the children will remember their dinosaur hats. There is a miracle in yarn unfolding around me.

I hate the holidays, and I'm not looking forward to them. This year I'm willing to give them a try even though I know my Christmas wishes are unlikely to be fulfilled.

Maybe you'll join me in wishing that all the children around the world will find their forever homes (and the courts get through a backlog of confirmations of such homes) this Christmas. It's a selfish request. A little boy who is dear to me is among them.


And you should totally go read this: a PK mate of mine  in Spain. This Christmas, in all of the wealthiest countries in the world, there are still street children.
Posted by American in Bath