Brightly Colored Veg: Learning to Live with Five a Day 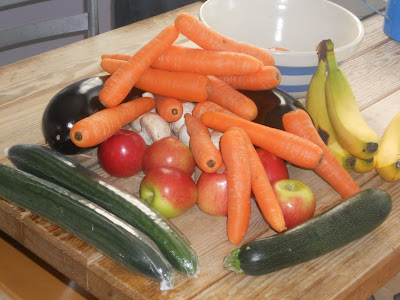 When I was growing up, my mother made cucumber and carrot sticks, she broke off cauliflower and broccoli florets, and she cut stars into the tops of radishes before throwing the lot into old margarine tubs and covering with them with water. Mom would place these on the bottom shelf of the refrigerator, allowing my sister and I to graze our ways through the day.

It isn't a terribly practical plan here. My butter containers would fit just about two carrots. Refrigerators are small, and unlike the US, freezers tend to be on the bottom. I've tried over the years to emulate my mother, but vegetables tended to get eaten before they made it to the tubs or forgotten all together. Here I share the the refrigerator with my housemate, and she'll be the first to tell you that I forget about the food I cannot see when first glancing below the counter and into the fridge. Food was rarely wasted, just eaten well into the floppy but edible stage.

I'm terrible about making complete meals for one. I plan them, buy the food stuffs, then eat the ingredients one by one. This usually results in a lot of uncooked pasta and rice. It isn't that I don't have the time, but that I generally eat when I reach the point of starving or when I'm trying to sit down to write. I generally cook when someone might thank me for doing so. The question is one of degree. While I am happier when I am fed, I am happier still when I have fed someone else.

Years ago I stopped getting hungry. Until the point at which my eyes rang the migraine alarm bells or I simply fell over, my body gave me no reminders to eat. I wouldn't have eaten at all at University had the other women in my hall not knocked on my door and asked me when I was going to dinner, to breakfast. Mostly, I forgot lunch until after the dining hall had closed because there was no one to remind me to put food into my stomach between classes and work. When I tried to explain, men and women alike envied me my stick figure.
I still rarely get hungry; though, I have lost the stick figure.

Friends will tell you that I am never so grateful as when someone feeds me a meal they have cooked. They'll say that I eat ravenously. They may even say that they have heard me utter the words: I'm hungry. My friends are reasonably smart people. They know what I mean is that I want to break bread in their company. They know that I have likely forgotten to stop for a moment for lunch. They know I have looked toward my own kitchen and figured I'd go and make something soon. Soon is rather like the rest of the future; it rarely arrives when we most expect it to.

The night before we buried my grandmother, my sister made a roast for my brother-in-law, my father, my stepmother, and I. We ate slowly, taking our time over the thick slices of pork.  We didn't talk about what the next morning would bring; though, my father slowly articulated our families life in that far off place we call a long time ago. For one short moment, we forgot the forks in our hands, the dishes to be done, the years in between that make the distances between us so necessary. There in the rental house, I sat with my father and one of my sisters, and we ate a home cooked meal as a family--something that hasn't happened in sixteen whispering years.

I am trying to learn to eat food cooked for one. It has become, rather suddenly, a necessity. After that dinner in Denver, we sent my sister and her husband on a date. My stepmother began to do the washing up, and Dad prepared for bed. I opened my laptop, typed my password, and discovered that the job that made up the bulk of my income no longer existed. Nor did the job of anyone else who was working from outside of the state in which the university's buildings sit.

And I am lucky. I have a second job with good people who are throwing as many hours as they can afford in my direction. I have friends who have been out of work for two years, who at thirty-three are living with their parents who themselves cannot afford to retire. I have friends who have been told to go back to university to retrain, despite their PhDs and decades worth of student loan debt. I have friends who dole out calories to their children, skimping on their own, in hopes that children who feel hungry are still well enough fed. But I also know how thin the line between underemployed and unemployed is. I know that the electric bill is going to be much higher than the amount the housemate and I toss into the savings account each month. I know that I may or may not have enough hours next month to make up the difference. I know that what I write as melancholy is really fear. So while I search for another job that may well be forthcoming, I'm buying what's left at the end of the day at the veg stall to avoid paying rent with the emergency plane ticket. And I am grateful that it is, for now, more than enough.
Posted by American in Bath