Gardens and Spring and Maybe Soon

Yesterday morning at ten, the fog was still so thick I couldn't see the tree in downstairs guy's garden. By eleven, we had full-on sun, and I was digging out my sun glasses. England is preparing for spring, as are the many style bloggers I so envy for their visual sense. Modern Country Style suggested a garden party to celebrate almost spring here on the island. My one poet friend in Fairbanks is thumbing through seed catalogs while another is painting his way to spring.

One of the ways I fantasized my life in England was with a vase of newly cut flowers on my table. It's not an expense that I can afford. Some five years later, I've learned to enjoy the cut flowers in their un-purchased state.


And to await the the hanging baskets, which will soon look like this: 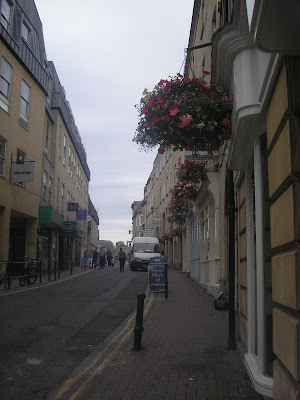 I'm ready for summer. We had one last year, so it should be just another five years before the next one.
Posted by American in Bath