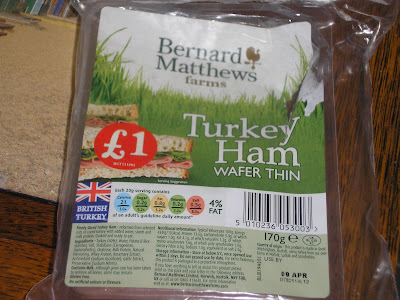 So when I went to visit Mrs. AmericanEnglandStyle she produced the above packet. Remind me to never ever again doubt her word. I have never liked bologna (although my sisters maybe inclined toward correcting that statement). As it turns out, I still don't like bologna. And Turkey Ham is, let me assure you,tastes like bologna. And it has the texture of wafer sliced, well, bologna. Suffice it to say, I may sing the Oscar Mayer Bologna song, but I wont be eating it any time soon.

I will however be eating many yummy things when I'm at home. Take note my sisters, I need some food.

1. Mexican Food (Colorado version)
2. Tostitos, Fritos, and corn nuts, Doritos--You can get Doritos here. They're good, but not the same.
3. jalapenos--the fresh variety.
4. Life Cereal
5. Clam Chowder
6.bbq beef
7. A steak that is actually rare.
8. Corn bread.
9. Wintergreen lifesavers.
10. Root beer
11. Bratwurst (by which I mean the American version)
12. Grilled corn on the cob
13. Corn on the cob.
14. Watermelon (you can get it here, but yuck)
15. Meatloaf.
16. Pancakes, maple syrup, bacon and american breakfast sausage.
17. EasyCheese. (I suspect I will think this is gross after one squeeze, but yum)
18. French Toast (I can get and make this here. I just don't want to call it eggy-bread).
19.Lox and Bagels.
20. A reuben sandwhich.
21. BlueCheese dressing.
24. An American Style salad.
25. Something deep fried with Ranch dressing.
26. Fried Chicken.
27. Sloppy Joes
28. Grilled Cheese (Yes it is different than cheese on toast.
29. A BLT wish crispy bacon. (I know I say streaky bacon is the same, but it isn't).
30. Waffle for breakfast.
31. A sausage and green olive pizza.
32. Sopaipillas

I'll think of more before I get there, I'm sure.