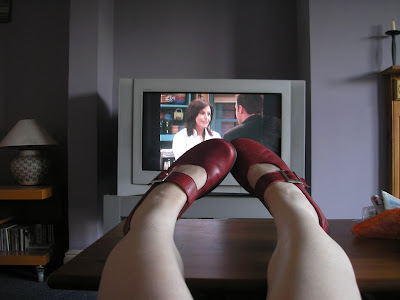 It's gorgeous outside. The sun has just dipped below the hills west of the house, so the fields below the are innumerable shades of green and the neighbors horses are gently grazing. I'm watching friends and thinking about everything that somehow must get done tomorrow. It isn't much really, but I'd like to finish the shawl I'm crocheting and that feels like a pleasure. As a child of protestant America, I'm not allowed to do the pleasurable until the work gets done. I'm likely to finish that shawl sometime next January--unless we're suddenly allowed crochet hooks on planes.

Sherry at Wherever She Goes  in Alaska has given up her family's home internet and television. They've not done it for the same reasons that so many essayists and editorialists seem inclined to mention. It isn't about saving her daughter from the red monster, nor is it about rejecting a modern way of life.  Rather Sherry and her husband would like to buy a house one day. Getting rid of the telly and the intermonster have done all of those other things for them, but it is also allowing another $100 a month to go towards that one-day home.

My current big purchase dreams are a sewing machine, a bed of my own, and dishes. It's difficult for me to remember that the Great British need to buy a home isn't part of my own experience or make-up. Culture here demands that one of a young person's goals should be to own a home. There are some good reasons for that that I may get to another day when I'm feeling brave. But it wasn't until I moved here that I ever thought that owning a home was important. I certainly didn't see renting as a problem, particularly since I didn't have children.

While I could now, given the right job in the right income bracket, afford a mortgage in the States, I carry a lot of student loan debt. Even at the height of the economic-ruination bonanza, I wouldn't have been able to get a mortgage for exactly that reason. So what money I do have to save goes in the sewing machine/new bed/dishes category. I'd happily give up the television for a sewing machine, but we don't pay for television. I can't give up the internet--I use it to do my job. And for me, there are many other negotiations involved.

When I moved into the flat, I only expected to be here for eighteen months. A year before moving in here, I'd given away or taken most of what I owned to the transfer station, left a few boxes with friends, and simply left some of it behind in the cabin. Giving those things up wasn't difficult; the reality of living out of two suitcases was. I no longer owned a bed or a chair, so I tried not think about who else had slept in the beds in my rentals. I tried to remember not to balance my coffee cups on a the couch cushions, and I was very careful not to obtain things I might want to keep. I did bring a skillet, a soup pot, cutlery, and bedding with me.

Back then, it made sense to move into a partially furnished house with a housemate who had enough kit to fill out most of it. Over time, my own belongings have begun to bulge from my room, off my bookshelf, and out of my cupboard. More than that though, I'm longing to make a home of my own. I don't want to need to apologize when I break a glass. I want to be able to put my headboard against any wall in the house rather than having to think about our shared wall, I want bowls that aren't blue. It all comes down to another desire--I want my life and decisions to stop being made on the basis of transience.

When I first moved into the flat, we didn't have a landline or internet. I did most of my work at the local or uni library, and I felt like I was allowed to watch telly when I got home. I did a three-year master's degree in the States. Inevitably, I had class on a Thursday night. For the following year and a half, I taught on a Thursday night. Those first six months of evenings in this flat were spent getting caught up on Friends two episodes at a time. I got into the habit (or back into the habit) of keeping the television on for the sake of noise and company.

It is looking increasingly like I am not going to find a job that pays enough to keep me in the country under the points based system. Still I need a job in addition to the teaching I do online to live out my UK visa days. As I said, the television isn't mine. I don't own it, and it sits in communal space. I'd like to see it gone because my own will-power isn't enough to keep me from turning it on and ignoring the things I need to be doing on the internet.
Posted by American in Bath