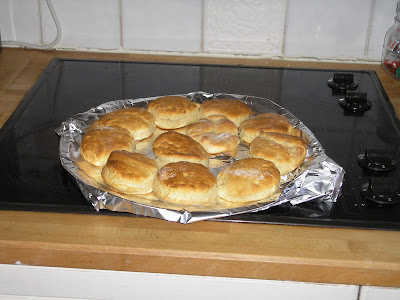 The major difference between the two is the use of creme and eggs in scones, giving them a richer taste and a heavier texture. While I love my scones a little too much, I've been craving American food an awful lot lately.

I've spent the last year telling you all how little I miss from home. But I bought a plane ticket a few weeks ago, and I'll be visiting the States and my family for two weeks this spring. It's been four years since I've been back to the US and just as long since I've seen my family. This event more than anything else in the last five years has led to a generalized desire for the things I cannot have. Later this week, I'll tell you what all I intend to eat while I wander around the streets of America.

More than one child in the West Country is still missing. Among them is James Bubear. It is becoming more and more difficult to keep his name in the news. If you would please, click on the badge above and list your support for his family on the Find James Bubear Facebook page. James is a first year student at my Alma Mater. His family and friends are desperate to bring him home.
Posted by American in Bath