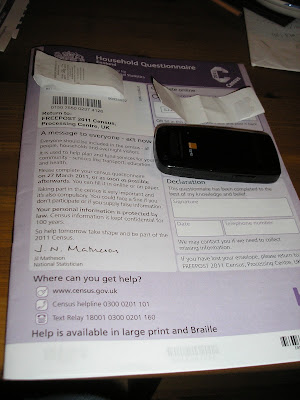 I'd been relatively excited for the census form to come through the letter slot. It landed in the hallway many days ago. It's a little like those Christmases when all I asked for was a scarf, and I was given warm socks, gloves, and stacks of books. I'd feel so tremendously grateful, but my neck would still be cold. My cold neck would keep telling me about the wind chill factor, even as my feet thanked my sister for the new wool socks. It wasn't a lack of gratitude, just a niggling whinge. I'd send my neck to bed without supper. That usually solved the problem.

At first I wondered if my great nieces and nephews would take the time, a hundred years from now when the specifics are released, to track down my name. I wondered if they would try to piece together who I was and perhaps why I was here instead of in the States. I wondered what they would know that I do not yet know. Do I remain? Can I be found in the 2021 census U.K citizenship in hand? Or, will they have to search for me in Australia or Canada or America or Belize? Will I finally be the maiden aunt that my three nephews and niece recalled seeing once every few years but not much after my fiftieth birthday? Will they know that the book, any book of mine, had finally been published? Will it seem odd to them that I hold an Academic title or will they know already? What will they make of the scattering of information the census will give them?

They most certainly will not know that my pen hesitated and hovered when it came to giving my country of birth. It is an easy question. I am, by birth or otherwise, not English, Welsh, Scottish, Northern Irish, or from ROI. I am without question from Elsewhere, Write in the Current Name of Country. Black tick mark, USA, and I am forever listed, by my own hand as foreign.

When did you most recently arrive to live here? How long do you intend to stay? Are you in good health? Do you help family and friends? Is your national identity: English or Irish, Scottish or British, or Other Write In? And your ethnic group: English / Welsh / Scottish / Northern Irish / British, Irish, Gypsy or Irish Traveller, or  Any Other White Background Write In? What passport do you hold: United Kingdom, Irish,  Other Write In?

I'm grateful to the UK for a lot of things. This year's census isn't one of them. So here is the story I would have told had I been given enough space.

Individual Questions:
1. What is your name?
Actually my name hasn't changed since question H3 and H6.

4. On 27 March 2011, what was your legal marital or same-sex civil partnership status?
Never married and never registered in a same-sex civil partnership. It's terribly redundant by the way. The courts have been very clear that same-sex relationships cannot become marriages and dual-sex relationships cannot become civil partnerships. As for my marital status, I'm not married. Or if you prefer the term my grandmother used to use, I'm 'still single.' Yes, I know that I just told you that I'm thirty-three. Yes, I know that this government would let me have some extra dosh if only I'd go ahead and get hitched. Yes, I'm aware that there are a lack of marriages, if you ask some, and my singleness will lead to practical starvation in my old age. If you must know, no one will have me. And even if someone would have me, I'd have to ask permission of the government to get married seeing as I'm foreign. It's been months since I thought about it, so thank you for reminding me.

9)What is your country of Birth?
Elsewhere, write in name of Country, USA. I'd have spelled it out, but those whole nine spaces you've left me to do so, were oh so helpfully too short. Clearly, I am an American. Don't you read the blog?

10)If you were not born in the UK, when did you most recently arrive to live here?
12/2005. And in a few months time when the current government stands up in parliament to whinge about all those people who have outstayed their original visas, had the nerve to pay for a new one, filled in the all of the paperwork, sat in processing centers, and been given permission to stay longer, I'll know that you mean me. Never mind the countries actual need for highly educated persons. No, I know that you'll spit me out as one of those statistics that imply that I am clearly taking advantage.

14) Do you look after or give any help or support to family members, friends, neighbors or others because of long-term physical or mental ill-health/disability. Problems related to old age?
Yes. Do you think that you could mention that alongside question 14, please?

15) How would you describe your national identity?
American. I'm foreign. I'm pretty sure we covered that before. I really want to describe myself as British, but I suspect that that isn't really what you mean.

16) What is your ethnic group?
Any other white background, please write in. American. Can we please, please, please only use the word ethnic when it is definitionally appropriate? And maybe you could consider that ethnicity does not exist except as a way to define the other. Someone remind me to address the ethnic group debate here and in the US.

22. What passports do you hold?
Can we talk about this? Would it worry you if I said Martian? I'm an American. I'm foreign. I am here legally. I get that I am not a British citizen. Can this be the last question that highlights this, please? It is. Good.

25. Which of these qualifications do you hold?
So I told them, but then they wanted me to tick a box if those qualifications are foreign. But only part of them are. Hmmm. I do feel for the statisticians.

34. What is your full and specific job title? Hourly paid lecturer. Yes, it is exactly the same job I held before coming here and spending a lot of time obtaining a PhD. Yes, it is true that I thought a PhD would get me a full-time permanent position. No, I couldn't have predicted that I would ever live through such a deep recession as this. Yes, I should have predicted that the humanities would be considered a convenient line item i the budget here and abroad. Yes, I see that I should have followed my mother's advice and become and engineer. No, becoming an engineer now will do me zero good, since new engineers are making a pitance.

38. In your main job, what is the name of the organisation you work for? The University of ________. Um Yes, I do see that that is not in the UK. Did I mention giving up a shop job to take another job and the new company going bankrupt? Did I mention that I love teaching online, but it doesn't actually pay the bills? I get that I am a complete failure in the obtaining work paying 35,000 pounds a year in order to fulfill the points-based system requirements. I get that that number is 11,000 pounds a year higher than it was 18 months ago. I get that I am more ancient in the land of the points based system than I am on the marriage market. I get that I am well qualified for work that you are desperate to have filled, but that work does not fulfill the 35,000 pound requirement. Thanks for bringing it up.

42. In your main job, how many hours a week (including paid and unpaid overtime) do you usually work? That depends on whether you ask the university or you actually add up my hours. Do you really want to have this conversation?

Declaration.
My name, today's date, and my telephone number are exactly the same as they were an hour ago.

I must sound even more bitter to you all than I do to myself. The purple form has been filled in (out) and popped in the mail. I'm reasonably certain that I'll not see another census form for at least nine years. By that time, we could all be living on Mars.

As for the above photograph:  All government forms in this country have a pastel main color with bright color highlights. Those of you who work in design can perhaps tell me why it is Easter year road in the government forms department. The census is no different. It's pastel purple with true purple highlights. True purple is also the universal color; it looks good on all of us. Boy does it stand out with the other mail. I feel like it should have been what we called diarrhea green when we were kids. Maybe I'm being unfair  because Census 2011 made me want to blow chunks (wasn't being a kid fun?).

Edit: Kym of the Kanon Collective in Denver points out that purple, as a royal colo(u)r, seems appropriate for any form which counts the Queen's many citizens.
Posted by American in Bath

Email ThisBlogThis!Share to TwitterShare to FacebookShare to Pinterest
Labels: Bath, cost of living, England, spring, US