How Not to Offend Your Mother: Mothering Sunday 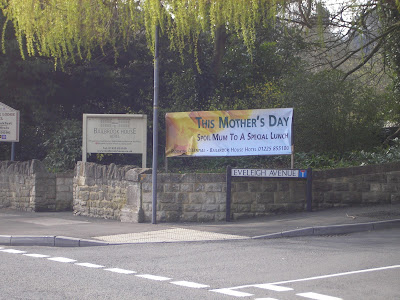 The shops here are full to bursting with Mother's Day cards, flowers, and gift vouchers (gift certificates). While British companies have taken on the all too American habit of suggesting, in May, that Christmas is just around the corner and placing Easter baskets in their windows before Valentine's Day has passed, the current reminders of Mother's Day are reasonably well timed. It is after all next Sunday.

Mother's Day is still largely referred to as Mothering Sunday here in England and throughout the United Kingdom. I have spent five years thinking that it fell sometime in March and feeling rather confused about which Sunday in March. This year I thought I had somehow managed to block out the holiday entirely, and I was therefore forced to go and learn something. I'm rather annoyed about this as this was supposed to be the year of learning nothing.

Mothering Sunday in the UK always falls on the fourth Sunday in Lent, and like its US counterpart, is widely celebrated in the secular sphere as well. I'm going to point you to my new favorite go-to website for all those niggling cultural questions. If a Junior School can do it better than I can, I'm all for letting them.

During my five years here in Bath, I've largely marked the day by buying my grandmother's Mother's Day card and putting it in an impossible to remember place in anticipation of American Mother's Day on the second Sunday in May. I did this so well the first year I lived here that Gram received an extra large bunch of flowers to make up for the lack of a card.

For those of you who are American expats, this is your reminder that to buy your Mother's Day cards this week. They will have disappeared from stores by the middle of next week. The American expat mother's I know often celebrate twice.

As for Father's Day, it is celebrated at the same time on both sides of the pond.

As for the sign above, I've asked around, and no one has seen that particular phraseology before.
Posted by American in Bath