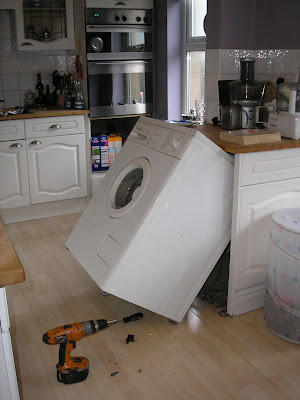 It is an open secret around here that I really hate our washing machine. It is a good machine, and it has been going round and round for at least seven years. The drum is large enough for a decent sized load of laundry, which is almost unheard of in this country. I can do smaller loads without heaps of guilt on the eco+small load cycle; though, I don't do that often. Most importantly, it is not digital. This means fewer computer breakdowns, and I suspect longer life.

But the machine and I got involved late in our lives. We both had baggage. Mine comes in the form of allergic (and exercise induced) asthma. The machine's comes in years of not bathing well enough, regularly enough. I have to admit that I didn't help matters during the first two years of our relationship. And now, I, we, have a weekly fight in which I scrub it and concede that it can keep some of its grime. Look, I can't help wanting a newer, younger model. Even though I know they have commitment issues, they're also clean. The vinegar, hotwash, powdered detergent regimen works well on them. I know they break more often. I know using an older machine uses less energy than just the manufacture of a new one. I know. I know. I know.

And still when the old machine started whirring in a non-jet plane manner, I couldn't bear to mention my desire for a new machine. I thought I might jinx the possibility. I thought if this one was really truly dead, I wouldn't mind so much. Even though I knew it would be at least a week before I could rewash the mess of sopping laundry sitting alternately in the bath tub and the bathroom (no toilet) sink, I was totally willing to suffer the loss of a few pieces of clothing to the mold gods.

I rent, so the cost wasn't actually an issue for me. If we didn't rent, I would have been all about replacing parts rather than the entire machine. I am suffering from serious camera envy. If I had an extra 200 pounds going, I'd hand wash my clothing in order to satiate the camera envy. Did I mention washing machines are expensive? Fortunately, I don't have to replace the machine and the camera envy should pass. 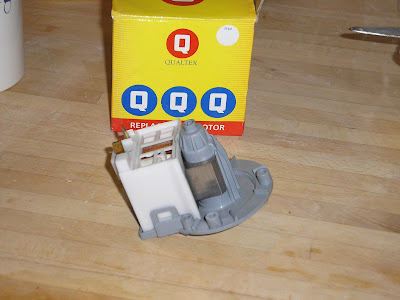 When I described the problem as "the sound a blender makes when its motor burns out and two inches of water on the bottom of the drum," I was completely right. The pump motor had gone. A new one was fitted in a matter of minutes. We don't get a new machine. I'm pretty peaceful about that, but only because the repair man also performed the miracle of making the airplane takeoff sound much quieter. 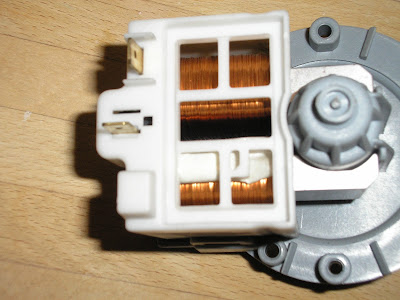 Now we have this problem. A problem which I am sure would look prettier with a new camera. This is the old pump. There is a shed load of copper in there. Does anyone have suggests as to how one sends something like this for recycling?
Posted by American in Bath